Aviador said:
Hurrah!! It almost feels like we should be getting the flags and bunting out.
Click to expand...

Ryanair has a agreed a pay cut deal with pilots and cabin crew to stave off the worst of job cuts.

The pilots agreed to the pay cut deal hours after Ryanair’s chief executive, Michael O’Leary, made public an ultimatum that a total of 3,000 job losses could only be avoided if all staff agreed to pay cuts.
The deal with Ryanair’s pilots saves 260 jobs that were at risk. Ryanair had said a total of 330 pilot jobs were at risk. Negotiations with cabin crew and other staff continue, lower paid cabin crew have been asked to sacrifice 5% of their pay.
Earlier on Wednesday, O’Leary had said: “We’ve already announced about 3,000 job losses but we’re engaged in extensive negotiations with our pilots, our cabin crew and we’re asking them to all take pay cuts as an alternative to job losses.
“We’re looking from 20% from the best-paid captains, 5% from the lowest-paid flight attendants and we think if we can negotiate those pay cuts by agreement, we can avoid most but not all job losses.”

Ryanair have added some extra capacity on Faro, with an extra weekly rotation from 11 Sept to 26 October.

Now that Portugal is off the quarantine list, Spanish supporters" will go almost anywhere to get the break they need.

Twice a week from 25 Oct I understand. 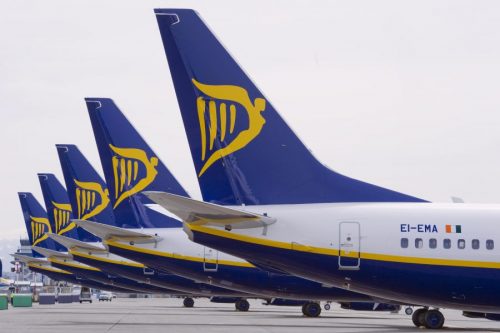 From October 25, the Dublin-based carrier will operate a twice-weekly link from the city to Košice, in eastern Slovakia.

It said booking is open now for the route which will include a new set of health measures that Ryanair has rolled out to protect its customers and crew.

Ryanair spokesperson Eimear Ryan said: “Ryanair is pleased to launch a new Liverpool to Košice route , which will operate twice weekly as part of
our Winter 2020 schedule.

“Customers can now book flights to Liverpool as far out as March 2021.”

Košice is a city in eastern Slovakia, close to the Hungarian border and is a former 2013 European Capital of Culture, along with Marseille, in France.

Its origins go back to the medieval period and is the second-largest city in Slovakia, after the capital, Bratislava.

The city has a well-preserved historical centre, which is the largest among Slovak towns.

There are many heritage protected buildings in Gothic, Renaissance, Baroque, and Art Nouveau styles with Slovakia’s largest church, the St Elisabeth Cathedral.

The long main street is the site of aristocratic palaces, Catholic churches, and townsfolk houses, along with many boutiques, cafés, and

Ryanair had added an extra rotation on Liverpool to Vilnius , so now they will offer 3 per week. Wizz recently launched their new 2 per week service.
You must log in or register to reply here.
Which aircraft do you consider to be the safest?
Share:
Facebook Twitter Reddit Pinterest Tumblr WhatsApp Email Link
Top Bottom