Possible Flybe route to NQY for summer 09. To be fair they are give NQY a good go from CWL i.e. 3 diffrent airlines. :smile:

If Flybe do CWL-NQY it will almost certainly be part of a longer route, perhaps NQY-CWL-ABZ.
E

Well will be interesting to see if they do pick it up. I don't think a flight just CWL-NQY will work but it could if it was stopping off elsewhere like ABZ, which has been missing from CWL for quite a long time now 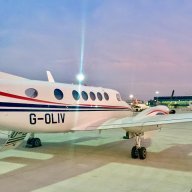 Loganair announced today that it is launching a new route between Cardiff and Aberdeen as part of a wider expansion plan that will benefit business and leisure travellers.

In a joint announcement with franchise partner Flybe, Scotland's airline will introduce the first ever non-stop flights between Cardiff and Aberdeen on April 19.

Daily flights will operate between the two destinations, except Saturday, and these will cater for both business and leisure travellers, as well as offering a convenient connection for those living in Wales and working in Scotland's off-shore industry.

As the first non-stop service between the two cities, passengers flying from Cardiff will also be able to connect through to other Loganair destinations at Aberdeen, such as Sumburgh in the Shetland Islands.

David Harrison, Chief Executive of Loganair, said: "We are delighted to announce the new service between Aberdeen and Cardiff. Our research has identified strong demand for these flights.

"We're confident that our competitive fares, starting at £44.99 one-way including all taxes, will prove highly attractive to both business and leisure travellers who have, up to now, been forced to make difficult journeys at high prices to travel between the two cities."

He added: "At Loganair we are constantly seeking to improve our service and, with Flybe, today's announcement is another step towards ensuring our passengers get the quality service they have come to expect from Scotland's airline at a competitive price."

Steve Hodgetts, director of business development at Cardiff International Airport, said: "We welcome Loganair to Cardiff and look forward to the start of the Aberdeen service, which has proved to be a highly desired destination from Cardiff.

"We'd like to thank all those business travellers who completed our 'you would if you could' travel survey last year as the evidence showing Aberdeen as the most travelled to destination not served from the capital helped convince Loganair to launch this new service.

"I would urge more business travellers to visit the site - www.youwouldifyoucould.co.uk - and complete the two minute survey, which could help substantially reduce journey time to other destinations in the future and also open the region to a number of new business opportunities."

Great news a link to ABZ

Rumours of recent weeks that Flybe would joing CWL and ABZ turn out to be true (so some rumours do have legs), but being a pedant I would point out it's not actually Flybe but Loganair in Flybe's clothes.

Now the route is secured let's hope people use it. It will certainly show whether those who reply to surveys put their money where their mouths are.

It's a smart move to use Loganair's small Saabs to start things off. If the route really went well Flybe might be tempted to take it over themselves with their larger aircraft or, better still, Loganair might be encouraged to go twice daily so business people could do a day's work at either end and still be home for bed.

I always had a soft spot for the Saab 340s when KLM used to operate them from the CWL and BRS to AMS in the 1990s - a bit noisy but an acquired taste once you get used to them.

That's not a bad schedule from Flybe with some important routes such as Edinburgh, Glasgow and Paris. It's good to see them working together with Loganair to get the Aberdeen route up and running. The Saab aircraft should be just about the right size aircraft for the job for the new route.

-->No Routes that started in S08 have been cancelled.
-->1 extra weekly rotation to JER
-->New Route to ABZ in partnership with Loganair

In honesty im not suprised that some routes we have seen the reduction in capacity/frequency especially with the current ecenomic situation. When the economy recovers we should hopefully see the capacity increase and possibly some new destinations.

Question
Who will handle the CWL-ABZ? Will it be put up for tender, or will Aviance handle the aircraft as it's a Flybe Franchise?

By the looks of it, there didn't seem any need for the extra Flybe flights, as it may have shown with no upgrading size of aircraft. I know that last year they operated the BAE146 around the rugby flights.

I think i heared that better deals were available for the italy match. Credit Crunch, Friday KO and Poor conversion rate doesn't help the situation.

Are you saying there were no extra flights whatsoever for the rugby - by any airline?

I know it was played on a Friday evening (a daft day and time for such a game in my opinion) but Wales normally take several thousand fans to away matches with Paris being one of the favourite destinations.

You may be right but it seems amazing to me that there would be no demand from Welsh rugby fans to travel to Paris to watch their country play France in the Six Nations.
N

On wikipedia it states that Flybe are going to start flying to Hamburg and Frankfurt on the 22nd of June! Can anyone shead any light on to this? Great news if it true!

Thats right that you shouldn't read everything you see on wikipedia, however i believe they were correct on some of the Flybe routes launched last year if i remember correctly.

I can't see where the aircraft would origionate from unless it will either be operated on a W pattern or via a new destination.

The same Wikipedia page is also showing a Flybe route to Rennes commencing 16 May.

Flybe only seems to fly to Hamburg from Birmingham at the moment although they advertise through journeys to such airports as EDI, GLA and BHD by changing aircraft at BHX.

As for FRA, there are more direct Flybe routes to that airport - MAN, SOU and BHX, with again other UK airports given a service by changing at BHX or MAN.

I can understand a Rennes route, probably Sat or Sat and Sun in the summer months.

Hamburg seems a surprise if the only other airport they use is BHX. It's not a great leisure destination from UK regional airports and I'm not aware of any major business links between South Wales and that part of northern Germany.

FRA is worth a go probably, although without inter-lining it might struggle.

Of course it might be someone being stupid on Wiki, as has been said.

These entries have now been removed from Wikipedia.

Now you can fly Cardiff to Aberdeen

A NEW service between Cardiff and Aberdeen was launched yesterday at Cardiff Airport.

Flybe and its franchise partner Loganair launched the flight after a survey showed a demand for the service, as Aberdeen is the most travelled to destination not served from the capital.

A large number of people working in the oil and gas industry commute between Wales and Aberdeen as well as students and tourists.

I'm sure the route will be popular especially with the marketing of the route coming under the Flybe banner. The airline must have confidence in the route to start it during the economic slowdown. One would presume that there will always be a need for links to Aberdeen, so long as there's North Sea gas and oil at least!

Let's hope it is a success. The 33-seat Saab 340 is a good sized-aircraft to begin with. Fares seem much more competitive than Eastern's route to ABZ from Bristol. It might attract some of those pax or it might force Eastern to review its own fares.

Air Wales tried it via Liverpool, and before that the BA franchisee tried it as well, possibly via Newcastle although my memory is not certain on that.
E

Trying to be the optimist, hopefully this is just a blip because of the recession. CWL will do well as will all airports just to maintain there present destination offering.
You must log in or register to reply here.
Share:
Facebook Twitter Reddit Pinterest Tumblr WhatsApp Email Share Link
Top Bottom
AdBlock Detected
Sure, ad-blocking software does a great job at blocking ads, but it also blocks some useful and important features of our website. For the best possible site experience please take a moment to disable your AdBlocker.