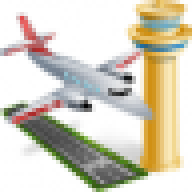 This must question the credibility of the apparent deal that was put together only in October of last year and the parties involved. I cant believe that the key parties would allow this to happen so soon let alone be associated with this

Flybe, Europe’s biggest regional airline and the largest airline in terms of passenger volumes at Birmingham Airport, is said to be at the point of collapse with bosses locked in survival talks in a bid to avoid administration that would put 2,000 jobs at risk.
According to Sky New, the airline has found itself at risk once again less than a year after its rescue by a Virgin Atlantic-led consortium of buyers.
The airline, which handles half of Britain’s domestic flights outside London, has been trying to secure additional financing amid mounting losses.
EY is understood to be on standby to handle an administration of Flybe Group.
Flybe operates about 75 aircraft and serves more than 80 airports across the UK and Europe.
On Twitter last night, Flybe said: “Flybe continues to provide great service and connectivity for our customers while ensuring they can continue to travel as planned. We don’t comment on rumour or speculation.”
In October, the airline officially changed its name to Virgin Connect following its £2.8m sale to a consortium of operators called Connect Airways, which was led by Richard Branson’s Virgin Atlantic. 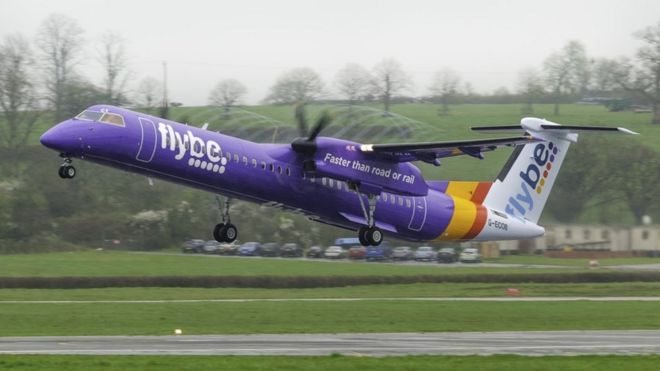 Lo-cost airline Flybe has declined to comment on media reports that it is in crisis talks in a bid to put together a rescue deal.
According to Sky News, Flybe, which has already been bailed out once, has been struggling to secure fresh finance.
But the airline said: "We don't comment on rumour or speculation."
It said it was focusing on "providing great service and connectivity for our customers, to ensure that they can continue to travel as planned".
The reports come a year after Flybe was bought for £2.2m by a consortium including Virgin Atlantic and Stobart Group.
Since then, the consortium has invested tens of millions of pounds in the troubled carrier, but losses have continued to mount.
Tourism adviser and researcher Prof Annette Pritchard, of the Welsh Centre for Tourism Research in Cardiff, commented on Twitter that Flybe provided "a vital social and cultural link for many marginal economies". 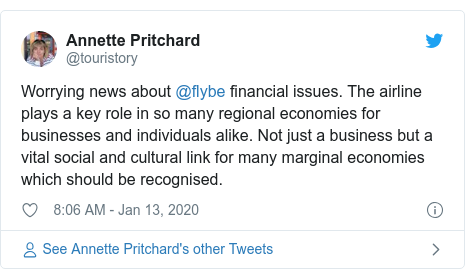 I
Based in Exeter, Flybe carries about eight million passengers a year from airports such as Southampton, Cardiff and Aberdeen, to the UK and Europe.
Its network of routes includes more than half of UK domestic flights outside London.
If the business collapses, more than 2,000 jobs are likely to go.
Union 'appalled'
The report on Sky News said EY had been lined up as administrators if Flybe were to go under. The BBC has approached EY for comment.
Brian Strutton, general secretary of pilots' union Balpa, said: "I am appalled that once again the future of a major UK airline and hundreds of jobs is being discussed in secret with no input from employees or their representatives.
"According to reports, the airline could have collapsed over the weekend, which would have been devastating news."
Mr Strutton called on Flybe's owners and the government to talk to the union, saying staff had a right to know what was going on.
Ben Bradshaw, Labour MP for Exeter, said Flybe provided "valuable connectivity throughout the UK" and called on the government to intervene.
He added: "Brexit and the way the government's aviation taxes hit a regional airline like Flybe have been a double whammy for the company and I would expect the government to work closely with its management to secure the future of such a strategically important business." 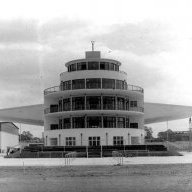 What I cannot stand about reports like this are the comments from the public. One complaining that there is no proactive information. Please give us all a break. Of course Flybe are really likely to say 'at this time we will not comment. But please do not buy tickets from us. And Do not turn up for flights already booked. Do that and all will be fine.'

It is not looking good I am afraid. Another sinking ship

The UK aviation industry is in a mess and quite frankly if this does happen, I will have no faith in any airline being financially safe, any airline.
N

The latest update on the Sky News article (who broke the original story) focuses on APD, reporting that Flybe are asking the government to defer their APD bill and the shareholders in the takeover consortium would then push ahead with the funding injection (and presumably rebrand) if this happens. Otherwise it could be bad news

This makes some sense as Flybe have long criticised APD, like when they cancelled London <-> Cardiff flights which although well used, weren't economical they said. Of course as of now they are publicly not commenting on any of the recent media speculation about collapse or otherwise.

Fingers crossed it all gets resolved.

Brum X said:
It is not looking good I am afraid. Another sinking ship

The UK aviation industry is in a mess and quite frankly if this does happen, I will have no faith in any airline being financially safe, any airline.
Click to expand...

No airline is safe.

Sweden has seen an across the board 4% decline due in a large extent to the climate change debate. The future in Europe could very well be, I am afraid, on a static or downward trend. Not just at BHX.

Critically will be the right connectivityand how that connectivity fuels the economy. We may even see a rise in a flexible charter operation - Uber Air anyone?

What we must maintain, as I have said many time, is business to business. The trips to the sun, fun for the holiday makers, but mean nought for the Midlands economy.

It is going to be very interesting. Sadly Flybe are unlikely to be the last.

I hope they survive.
5

nbdm said:
The latest update on the Sky News article (who broke the original story) focuses on APD, reporting that Flybe are asking the government to defer their APD bill and the shareholders in the takeover consortium would then push ahead with the funding injection
Click to expand...

Good idea.I am bit short of cash and thinking of of asking the goverment to defer my income tax bill for a while.What do you think are the chances? Although to be honest next time it is due i will probably struggle then as well.

58terminus said:
Good idea.I am bit short of cash and thinking of of asking the goverment to defer my income tax bill for a while.What do you think are the chances? Although to be honest next time it is due i will probably struggle then as well.
Click to expand...

Is aviation a form of public transport?

Rail and bus companies survive by massive public sudsidy. If a company collapses the public sector steps in and runs the service sometimes in the medium to long term.

Aviation, however, nothing beyond repatriation flights.

Priority are the 2,000 staff at Flybe, however.

This made me laugh !!

Except BHX doesn't need rescuing! It's got a very good route network! 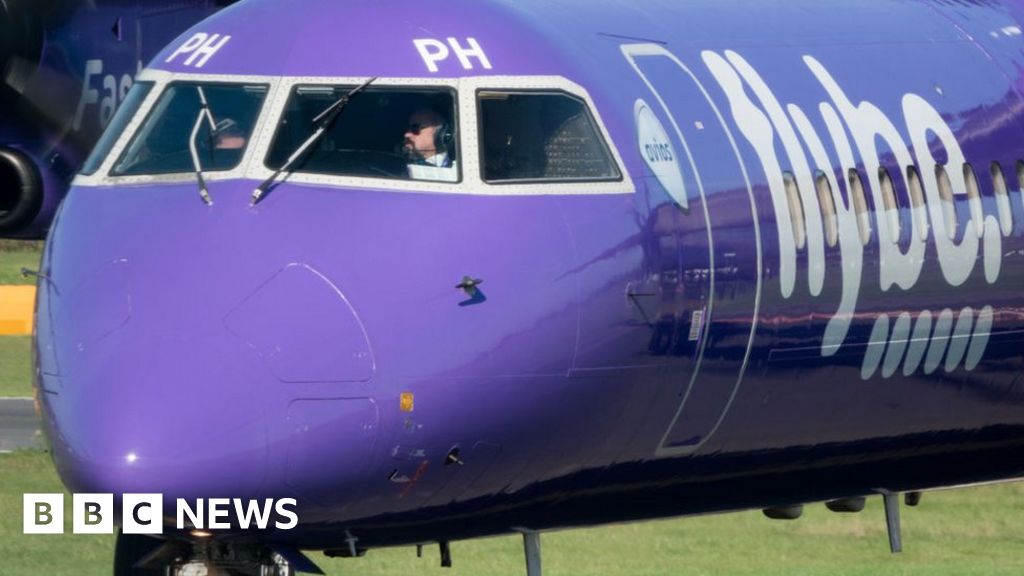 The airline’s investors will put more money in while the government will review air passenger tax.

Let's hope this one lasts.

"Meanwhile, the government has agreed to review air passenger duty, which had added to the firm's losses."

I suspect the government will commission a report that will be quietly published as a footnote in 6 months time and conveniently forgotten about... 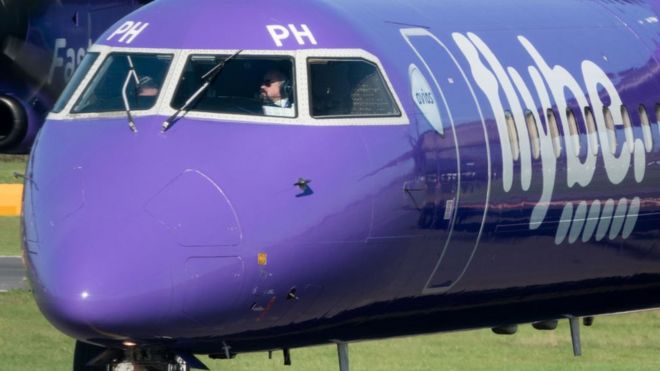 Troubled regional airline Flybe has struck a rescue deal with its investors and the government.
The firm's shareholders, which include Virgin Atlantic and Stobart Group, have agreed to put more money into the loss-making airline.
Meanwhile, the government has agreed to review air passenger duty, which had added to the firm's losses.
Business Secretary Andrea Leadsom has said that the deal would keep the company operating.

Excellent. Aviation is public transport. Prefer that the APD stays for internal flights - go by train - but the importance of these connections cannot be understated. Well done to all involved. Now turnaround the airline and get on with establishing it as a stable going concern.

Good news that Flybe has been saved for the next 12 months but then what ??
A

Hi there all, then flybe will be in the same mess as it is now... Andyc
A

Hi there all again, also, how many aircraft do flybe have that are leased. Andyc

Jethro's Fleet Listings shows that nine Q400s are leased from Nordic Aviation Capital. None of the E175s, or E195s are marked as leased (the list includes the E195s operating for Stobart Air).
5

Brum X said:
Good news that Flybe has been saved for the next 12 months but then what ??
Click to expand...

Depends on if you mean then what?? for BHX and other airports or the group who bought it Brum X.
For regional airports i worry, for the group good times i suspect.
The cisis suddenly became public at very short notice.Not a hint i am aware of in the media before Monday. .Going back to TC and Momarch their problems were public knowlege well before their demise.
The sudden news put a newly elected goverment who have promised better regional conectivity in a very awkward spot.A few weeks after the election and fail to act and theres one promise which meant nothing.
The £100m reported as due at £13 a passenger i reckon is about a years APD for FLYBE so a considerable amount must have been owed when the were bought out.I wonder who else havn't been paid out of the £100m investment promsed when they bought it?
The iceing on the cake is that they are going to change their name shortly and all the negative publiciy FLYBE have had will mean nothing to the general publIc as they will be booking with Virgin.
Hopefully having played the regional connectivity card and been allowed to keep? taxpayers money the goverment will have some say over their future plans but i suspect they are to clever for politicians.

58terminus said:
Hopefully having played the regional connectivity card and been allowed to keep? taxpayers money the goverment will have some say over their future plans but i suspect they are to clever for politicians.
Click to expand...

I wonder if the suddenness of it was actually planned to try and manoeuvre the government into deferring the APD and get them to review it with the potential of cutting domestic APD?
You must log in or register to reply here.
Which flights have you taken?
Share:
Facebook Twitter Reddit Pinterest Tumblr WhatsApp Email Link
Top Bottom