This is a thread for topical discussion about Emirates Airlines.

The new Airbus A380 stand is taking shape at Manchester International Airport. The foundations have been layed and the structure on top of which the airbridges will sit have been errected.

Emirates are the first airline currently expected to operate the huge superliner into MAN, and hence make use of this triple airbridge stand. Once operations begin, EK is planned to operate twice daily from DXB, with the first service using the A380 and the second utilising the smaller Boeing 777-300ER (currently used on EK operations from MAN.)

EK have proposed a date to start their A380 operations (as mentioned in the above post). They plan to start utilising the A380 on the first of two daily services from DXB, with the second service utilising the Boeing 777 craft from 1st Sept 2010.

The A380 services are operating the EK17 inbound and EK18 outbound flights as of 1st Sept 2010. (Just to clarify from the above post)

Thanks for that information Type Rated B767. That's one to look out for!! :good: 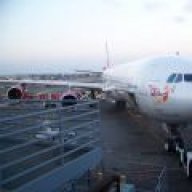 The 747 may BE old but in no way is it starting to LOOK old!! A Spitfire looks old compared to an F-16 but a 747 doesn't look old compared to newer aircraft like 777's or a380's. And they certainly don't seem to be rarer, at least going by the amount in&out of the likes of Heathrow. Every time I pop down to Manchester I always seem to see more than one 747, either the Virgin passenger ones or China Air Cargo, yet sometimes not even one 777 (and even the Emirates 777 has now being replaced with the 380). The cargo planes I see are always 747's, and let's not forget that there's no mention whatsoever of swapping Air Force One to the newer 777, 340 or 380.

The jumbo (like the B-52) may be old but they will be around for a very long time yet!

[offtopic]Now that's something I'd like to see - a European Airbus as the US President's official aircraft.

Never going to happen though.

Just imagine the furore amongst the American aircraft industry, US politicians and even some parts of Uncle Sam's public.[/offtopic]

[offtopic]The Americans would sooner fly a reconfigured Dakota as Air Force One before using Airbus.[/offtopic]

"Emirates' UK vice-president Laurie Berryman said the airline could be forced to review its position at UK hubs if the departure tax continues to rise."

This must be a worrying statement for airport such as Manchester. Emirates has expanded and stuck by the airport year on year. It would be a huge blow if they decided the route wasn't paying it's way.

It's not only the UK that has this sort of tax.

If this is a serious 'threat' it will presumably apply to some of these other countries, in which case one wonders how this will affect the planned huge expansion of the Emirates fleet over the next decade.

Even with the massive growth of the economies of China and India, Europe remains one of the world's major players and Emirates could not realistically reduce its exposure.
U

I can assure you the MAN route is more than paying its way, why do you think its one of the very few A380 routes in the world and also the only UK regional to have F class.

world_rep said:
I can assure you the MAN route is more than paying its way, why do you think its one of the very few A380 routes in the world and also the only UK regional to have F class.
Click to expand...

I am not disputing what you say, in fact I am sure you are right. What did you make of what Laurie Berryman said about the UK departure tax?
U

I think Laurie is just joining forces with MAN that you cant tax airports like MAN at the same rate as LHR. The fare structures are so different that its silly to charge say £20 tax on a £30 flight say FRA-LHR, but then charge the same £20 tax for a £25 on FRA-MAN.
Also he makes a valid point that the tax brackets are ridiculous, that you pay more on a trip to HNL than you would to BGI.

I think all the UK regionals need to link up with MAN/EK and get this tax reduced, as its going to strangle the UK aviation industry and that wont benefit anyone, not even the tories!!!

Does anyone find it ironic that iths the CONdems that are increasing tax, especially on domestic flights, but then the Lib dems used 2 scot airways dorniers to hop around the UK during their election campaign. Obviously one rule for them and another for us 'peasants'.

Does anyone find it ironic that iths the CONdems that are increasing tax, especially on domestic flights, but then the Lib dems used 2 scot airways dorniers to hop around the UK during their election campaign. Obviously one rule for them and another for us 'peasants'.
Click to expand...

It's not just at election times either and the Conservatives with their enthusiasm for the idea of drastically reducing the need for domestic flights are no better.

One might have thought that the Labour Party would be the most opposed to air travel but their national government's espousal for increased traffic at many UK airports, vide their 2003 White Paper, rather cut that particular ground away. However, a couple of years in opposition will soon see their champagne socialists come out against more air travel if it suits them to say so politically.

And soon both AI and 9W are about to announce something. Poor Hassan is going to have a mild heart attack at all this MAN expansion, especially with both AI/9W at MAN and not BHX!
J

Does anyone know why the A380 departed 2 hours and 12 minutes late today from manchester?
J

Anyone know why UAE18 is being shown as cancelled on both flight status and Dubai International Aiport arrivals board, ive also checked on flightradar24 and there is no EK18.