"“The introduction of the Boeing 767-400 aircraft is the most significant increase in capacity on our nonstop Manchester – New York/Newark service in over a decade and underscores our commitment to Manchester and the North-West of England. "

Finally made it to the Evening News

Considering a certain poster on here was adamant UA would pull MAN next, quite a good move I’d say.

That is good news!

and there is one person on airliners.net citing the dollar/pound exchange rate as the reason for US carriers "abandoning" MAN as selling in pounds and converting to dollars as too costly as it's predominantly UK travellers using the routes. The evidence of UA really bumping up capacity from Summer seems to contradict that bit of conjecture

I can't see the point of flying transatlantic from LPL unless the destination is not served from MAN. 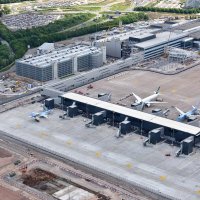 Weekly capacity between New York and Manchester during the summer is set to drop by a third compared with 2019, but United Airlines is awaiting price stabilization before deciding whether to expand.

Here is the result of that evaluation

A further update from Airlineroutes

So this United basically canning of the Summer 2020 season? Or been cautious so that they don't owe anyone money if they have to further delay the re-start date? Smart move if the latter.


Rob c DSA said:
Wonder if they would bring the date forward if things have settled down
Click to expand...

They should; providing we are all good. But if we are not i suspect it is United suspending Summer season and writing it off.

The dried fruit forum saying United will be only serving Heathrow in the future with all regional airports axed.
As it stands EDI is bookable next year but both MAN & GLA are 1 stop via Europe.

To my knowledge, United so far haven't announced any large scale retirements of any fleets, however some of their fleets are getting on in age: