The current England v India test match at Edgbaston is being touched on in the BHX Random thread over the past day or two. Rather than go too far off course in that thread I thought I'd ask this question here.

The England v India test match is likely to finish in three and a half days (or less) because neither of the sides was able to find a batsman, Kohli apart (and even he rode his luck at times), who could occupy the crease and build an innings. The likes of Root and Cook have proved in the past that they can do it but with Root I wonder if the non-first class game is having a growing adverse effect. I hope to be proved wrong in this series with Root scoring a big century.

Unless weather intervenes, more and more five-day tests seem to be finishing inside the distance. Is this the influence of 20:20 and one-day cricket which the players are spending more and more time playing?

I love cricket but I regard the single innings variety (especially 20:20) as mainly an entertainment that lacks the nuances, strategy and tactics of a full-blown test match. I compare 20:20 cricket with 5-a side football. How can players learn to improvise in 20:20 cricket unless they have learned to play cricket properly in the first-class environment? The knock-about comedy acrobats we sometimes see in a circus have all learned to be expert acrobats in the first place, or they could not act the fool in their comedy routines.

I watched a bit of the 20:20 Somerset v Essex match yesterday on the Internet. As someone who wants to see a serious sporting contest it was the worst of all worlds, but I concede that Somerset's innings was vastly entertaining if you like to see big hitting against woeful bowling.

Essex gathered a measly 135-9 from their 20 overs which Somerset overtook from only 11 overs and 2 balls without losing a wicket. Somerset's veteran South African 20:20 opener scored a century and he was ably supported by a 20-year old at the other end who did well in that aspect. What worried me though was that the 20 year old's first real scoring shot was an ugly six that he contrived to scoop over his shoulder. I would have gone potty had I been his coach. He could not and would not have played that sort of shot in a first-class match and he clearly has not learned his trade sufficiently to be able to do that even in a 20:20 match at this stage of his career, unless it was desperation stakes towards the end of an innings.

When I see youngsters playing those sort of shots in 20:20 matches I really do wonder how they can ever change their mindset to bat all day in a test match when required.

This will probably be seen by many as the ramblings of an old curmudgeon. That would be a fair comment if cricket lovers are content to see test cricket die in the coming years as it surely will if domestic first-class cricket is not afforded the spotlight and importance it once enjoyed, with the result that the only professional cricket on offer in the future will be one-day and 20:20 (or even less than that if current ECB deliberations come to fruition with the new city-based franchise competition) with mediocre bowling and batsmen slogging at every ball because they won't have learned how to play proper shots in first-class cricket.

Alistair Cook has announced his retirement from international cricket after the last test with India, it will be his 161st.

I didn't realise that his is 6th in the world when it comes to test runs.

A real loss to England his attitude was a great example and his ability to accumulate runs won or saved many games a real example for youngsters never any hint of controversy on or off the pitch.

A true great who as he has said just ran out of steam in the end.

Ray Finkle said:
Alistair Cook has announced his retirement from international cricket after the last test with India, it will be his 161st.

I didn't realise that his is 6th in the world when it comes to test runs.

Cook has been a magnificent and for the most part extremely reliable player for England which is priceless for someone batting at the top of the order. His record haul of test runs for England shows what a superb performer he's been.

However, I don't think I'd go quite as far as the BBC sports presenter on BBC Tv News this morning who said that Cook was the greatest ever England batsmen. He's certainly scored easily the most amount of runs but the likes of Hutton, Hammond, Hobbs and probably a certain WG Grace are among some names who most cricket people would believe were greater batsmen.

The fact that they all scored fewer runs than Cook is attributable to the much smaller test programmes in their day. Had they played as many test matches as the modern player it's fascinating to imagine how many runs some of them might have scored in test cricket.

Many people's vote for the greatest ever batsman would go to Sir Donald Bradman but his test total for Australia is fewer than 7,000 runs, albeit his average score in test matches is the phenomenal figure of 99.4. Australia's leading test scorer is Ricky Ponting who scored nearly twice as many test runs as Bradman but with an average of 51.85. Bradman played in 52 test matches; Ponting played in 168.

A look at the ten highest scoring batsmen in test history shows they all played the majority of their test matches in the last 30 years when so many more test matches were played compared with the pre-war and immediate post-war periods.

This is to take nothing away from Cook's wonderful record but it does need to be put into context with cricket records throughout history.

I hope that he continues to contribute to the game at a high level in some form or other. The loss of his knowledge and experience to England's cause would be a crime.

Forgotten to mention how I remember Cook batting in Australia with Jonathan Trott a few years back as England past five hundred for one, the look on the Aussies faces was a picture, they were not happy bunnies.
All three England batsmem got hundreds and Cook got a double.

There you go TLY! A full 5 day test match. And what a match it has been. England looked to have gained an unassailable lead, but a spirited performance by India on the final day got nerves jangling that it could end as a draw or even defeat for England.
History was made by Anderson and he did it in style - middle stump smashed!
Cook's excellent performance in his last ever test innings (could we see a 'Sir Alastair Cook'?). The wondeful gesture from the Indian players who all ran over to shake Cook's hand when he was finally dismissed for 147.
Overall, I've enjoyed the series (but then we did win) with some great cricket played by both teams.
One question. Do the teams have a formal dinner together either before or after the series? It would only seem right that the hosting team (or cricket authority) should hold such an event for their guests.

Twenty five years ago today Brian Lara achieved the highest individual score in first class cricket, 501 not out, whilst playing for Warwickshire against Durham at Edgbaston.

Ray Finkle said:
Twenty five years ago today Brian Lara achieved the highest individual score in first class cricket, 501 not out, whilst playing for Warwickshire against Durham at Edgbaston.

Brian Lara was a beautiful batsmen to watch. He didn't really suggest power at the crease, unlike say an Ian Botham, but he had it in shovelfuls. His timing was sublime.

I saw Graeme Hick score 405 for Worcestershire against Somerset at Taunton in 1988. In fact, I saw the second day of his innings when he went from 179 to 405. Those were the days went Taunton was a batsman's paradise, unlike today when, desperate to win their first ever County Championship, the county has been preparing wickets to suit their talented spin bowlers in recent seasons.

However, this season the faster bowlers have taken centre stage and currently Somerset sit at the top of the County Championship with four wins out of five matches still playing on, it has to be said, questionable wickets. l Notts made a virtue of such tactics when they had Hadley and Rice opening their bowling.
R

Warwickshire 'legend' Ian Bell has announced that he will retire at the end of the domestic season.


Warwickshire's former England batsman Ian Bell will retire at the end of the 2020 domestic season.

He has been on the staff at Edgbaston for 23 years and helped his home county win six trophies.

"To have been part of an England Test team to reach number one in the world, to win five Ashes series, one of them as player of the series, and an away series in India is some return for a young lad who simply dreamt of batting at Edgbaston.

A fine player, always thought he was discarded from the test squad too soon whilst lesser players were allegedly given a chance. A testimonial or benefit test match would be a wonderful tribute!

A magnificent part of England's team - both test and one-day cricket - for so long. I particularly liked him because he did not aspire to be a 'character' but simply got on with the job that he did so well.

I cannot recall any controversy that involved Bell other than this one (see below) which was without malice on Bell's part. It actually showed what cricket is still meant to be all about: the spirit of the game taking precedence over the strict interpretation of the laws.

I read that he now wants to follow a coaching career in the game. I'm sure that he will prove to be an outstanding one and might become England's head coach in the future. 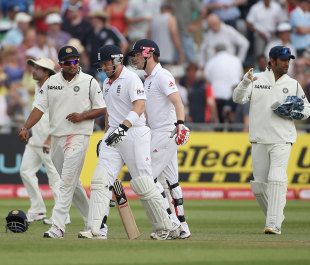 To be sure, Ian Bell will be talked of in the same way as David Gower as a pure batsman but without the media nonsense that followed Botham and Boycott and Pietersen.
You must log in or register to reply here.
New to Forums4airports? Introduce yourself here....
Share:
Facebook Twitter Reddit Pinterest Tumblr WhatsApp Email Link