Not strictly what this section was intended for but I could not resist posting a link to this fabulous picture.

It shows an Airbus A380 'landing' at BRS. In fact, the aircraft was making a low pass overhead the runway with wheels down.

Acknowledgement and thanks to the site owner and photographer in the link for providing such a striking image.

Easyjet line up at Bristol by alphagolf, hosted on Forums4airports.com

Recently uploaded to the Gallery by alphagolf. :good:

This link is to a stunning picture of a Ryanair BRS take-off at sunset. 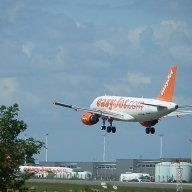 Do we not have anybody on the Bristol forum who is interested in aviation photography?
R

A lovely shot of G-OOBA at the end of runway 27 with the Bristol Channel and South Wales in the background. I agree, it's a lovely shot. TheLocalYokel has often commented on how close the Bristol Channel is to the airport but I never realised just how close it is. We visited the area not long ago but I don't recall ever seeing the Bristol Channel from around that location so it seems bizarre to see it in the picture. Can you effectively see Cardiff in this picture then?

I agree, it's a lovely shot. TheLocalYokel has often commented on how close the Bristol Channel is to the airport but I never realised just how close it is. We visited the area not long ago but I don't recall ever seeing the Bristol Channel from around that location so it seems bizarre to see it in the picture. Can you effectively see Cardiff in this picture then?
Click to expand...

The Bristol Channel is about 5-6 miles away. The picture does have a slightly foreshortening effect.

This is the western end of the airfield and it certainly affords panoramic views across the Bristol Channel to Wales as well as south and south west to the Mendip Hills (about four miles away beyond the Wrington Vale), Bridgwater Bay and, on a clear day, the Quantock Hills and the edge of Exmoor which is over 30 miles distant.

The fact that the airport has an elevation of over 600 feet and is so close to the sea accentuates its hilly position.

The western end is where most spotters and photographers gather as there is a lane with plenty of parking space (the local police never move anyone on and will sometimes stop for a chat) right next to the airfield boundary although serious photographers often come with a portable ladder to see over the high mesh fence between the lane and airfield.

The bit of Wales in the pic is Gwent in the vicinity of Newport. Cardiff is further west beyond the left-hand-side of the picture.

This airport is truly a rural one with fields and animals grazing right outside its boundary. Because it's in the Green Belt no other industry is allowed. I used to only half jokingly suggest that the airport and airline should have made it a marketing feature when the CO flight to Newark was in existence - telling Americans they'd be landing at a quaint little airport right in the middle of the English countryside.

Welcome To Forums4airports PhilJones and feel free to upload your pictures to our gallery too!

Great pictures by the way. :good:

I'm delighted to add my welcome too. These are stunning pics.

I believe you might be the man whose camera work I've long admired on a very well-known aviation web site.

Thank you for bringing them to Forums4Airports.
R 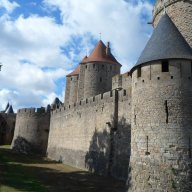 BRS is organising a charity walk/cycle/run day for staff on the runway, sometime in March.

Nice! Do you work at the airport, Krakatoa?
Sadly I'm not staff.
If walking with a camera was permitted, I could imagine it being a great photo opportunity.

If the weather is good I will take my kit in.

Fascinating idea. Has it been done before?

I can't help wondering how they will fit it in between aircraft movements. Any pics taken would be well received here.

Unfortunately its a midnight event. In march. Photos may be crap.

kraktoa said:
Unfortunately its a midnight event. In march. Photos may be rubbish.
Click to expand...

I thought it would be a bit tricky dodging all those easyjet and Ryanair aircraft coming and going during the daytime. :s_crazy

PhilJones has very kindly uploaded these pictures to the NEW Bristol airport gallery....