easyJet, the UK’s largest airline, has today announced that it will begin operating its first flight from Leeds Bradford International Airport on 17 December 2010.

The airline confirmed its plans to operate a popular winter ski route to Geneva from one of the fastest growing regional airports in the UK.

The new route will operate five times a week from 17 December 2010 through to 24 April 2011 with lead in prices starting from £23.99 (one way including taxes) and can be booked now via the airline’s website www.easyJet.com .

easyJet will operate some 182 flights of its Geneva route during the winter season from Leeds Bradford International Airport and has the capacity to carry more than 28,000 passengers in its first season of operation, making it the largest low-fares airline to operate a Geneva route from the airport.

“We believe that launching the popular Geneva route will bring enhanced consumer choice to passengers for a winter break destination.”

Tony Hallwood, Commercial and Aviation Director of Leeds Bradford International Airport, said: “We are very proud to welcome easyJet, the UK’s largest airline, to Leeds Bradford. The introduction of winter services to Geneva will provide increased choice for business and winter ski passengers and we also look forward to welcoming an increasing number of Swiss visitors to Yorkshire. This announcement underpins Leeds Bradford’s position as one of the fastest growing airports in the UK.”

Gayward concludes: “easyJet is committed to providing customers the lowest fares to the most convenient airports and it’s great to be launching our first flight from Leeds Bradford International Airport.”

As above fantastic news to have Easyjet onboard at Leeds/Bradford International Airport.
Geneva 5 times a week from December maybe from next April we may get a few more routes from Easyjet

But its yet another route for compertition with Jet2.com at LBA
U

More of a gamble to rely on one airline than to spread your bets with 3 surely?

LS16, i agree. The management would not go ahead with this if there was a significant risk to their other operations. Jet2 are set up at NCL and EMA now so i would put DSA out of the question and MME also. There is a huge untapped market at LBA and the region is well underserved in that respect.

Jet2 do not, I am certain, expect to have things all to themselves at LBA, any more than they do at other bases. They have improved their loads and profits from LBA despite the presence of Ryanair this year and they have happily gone into other airports in competition with other low cost carriers. They have just announced a new GLA base in competition with Easyjet and they already do the same at NCL, whilst they compete with Ryanair at EMA. From memory, Jet2 had reduced their flights to GVA next winter, which was a retrograde step for LBA. This announcement not only restores what we had but with interest.

We have all been complaining that Jet2 are not expanding from LBA as we would wish and it may be that they do not intend to in the future. It remains to be seen if Easyjet expand next summer, and if so which routes they operate. Several of the most popular routes are already served by Jet2 and Ryanair, so it will be interesting to see what they do. I think this is a good move, because if the worst happens in the future and Ryanair do go off in a sulk, this increases the chances that Easyjet will at least be waiting in the wings to replace them.

It amazes me how, when we get Britains biggest airline finally operating from LBA, we are immediately looking on the gloomy side instead of celebrating a major coup for the airport - and a major blow to our neighbours at DSA who have just LOST their Easyjet operation!
S

I agree White Heather. Jet2 & Ryanair, like LBIA are a business, and as such have the right to maximise their business opportunities to generate more income - as such, in the fickle world of airlines and tourism, LBIA are absolutely right to open themselves up to different airlines as much as possible and in this case, Easyjet. Why should airlines take all the profit by flying from different bases, when an airport could suffer if it remains loyal to an airline. I do however feel that LBIA remain a significant amount of loyalty to Jet2 - and rightly so. I think Jet2 understand this and would not be put off by this latest development. Sorry if i made the topic drift somewhat.

The new Easyjet flights to Geneva have just been uploaded and are now bookable online at www.easyjet.com The route will operate on Monday, Thursday, Friday, Saturday and Sundays from Friday, December 17th 2010 and will operate to the following timetable listed below.

Those times complement Jet2's morning service to Geneva well, no doubt it will have some effect on Jet2, but we have to bare in mind that Jet2's winter flights have been on sale for nearly a year and we have been told that forward bookings are ahead of expectations.

No doubt a very clever move by easyJet - after all Jet2 recently announced their Newcastle to Geneva route, so head on with easyJet. This also shows Ryanair that they are being closely followed by EZY, I think an easyJet base is out of the question for now, but lets watch this space.

It seems to me that easyJet pull out of Doncaster, and really piss on their parade by starting a route from LBA. Hats off to them! Talk about leaving with style!

In general terms the more carriers from an airport the better it is for that airport, except if the competition reduces the services of an existing and valuable long term operator.

easyJet has operated Geneva flights to/from Bournemouth and Birmingham (also to Grenoble from BHX) for a number of years without expanding or setting up bases there.

I'm sure there is scope for more GVA flights from LBA over and above the Jet2 offering and easyJet has spotted the gap in the market.

easyJet is very big to Geneva - for example at LBA's 'sister' airport at Bristol the Big Orange operates around 19 weekly flights in the ski season to GVA, at least double daily every day and up to 4/5 daily at weekends, or did do up to and including last winter. I've not checked this coming winter yet.

Tony Hallwood will have an excellent relationship with easyJet and I would not be surprised to see further routes at LBA though perhaps not a base in the immediate future.

We would be struggling to accommodate any more based aircraft for now anyway Local Yokel. It is reasonable to assume that LBA has at least the same demand for flights to GVA as Bristol does, and even with the Easyjet flights we are running at around half what Bristol had. I would be happy to just see EZY using LBA for W rotation flights, arriving during the day and hopefully covering routes that neither Jet2 nor Ryanair operate already.

W flights by easyJet into LBA would certainly be a good way to ease (sorry no pun) into a hopefully mutually beneficial, long-lasting relationship between airline and airport.

As LBA expands no doubt parking space could be found for an Orange base.

Your comments about ski routes are noted which means there is scope in that section alone for substantial additional flights having regard to the fact that Bristol (with probably a smaller core catchment in numbers terms than LBA) usually operates 45-50 ski rotations per week in season, including around 14/15 weekly charters, one or two of which also fly to Geneva.

It seems from where I am that airlines are now realising how big LBA could be - some would say ought to be already - so I expect to see the airport continuing to be the fastest growing top twenty airport in the next two or three years in percentage terms, with perhaps Liverpool also doing well though how profitable that will be remains to be seen.

Airports like Newcastle and East Midlands ought to grow significantly as well because they have had such a bad two or three years but are re-starting from a much lower base compared with where they once were, whereas the likes of LBA and LPL fared the recession better and will grow on merit.

It would be nice to see an airline expanding into Scandanavia and Germany, not sure how much presence EZY has over there. Certainly Madrid and more Eastern European routes would be good too.
U

White Heather said:
We would be struggling to accommodate any more based aircraft for now anyway Local Yokel.
Click to expand...

Local Yokel - out of interest, how many based aircraft does BRS have in peak summer. Easyjet is about 10 I guess + Ryanair & charters. Be interesting to compare it to LBA considering BRS is over twice as busy from a pax perspective.

easyJet has 10 based aircraft at BRS in summer rising to 11 in the peak July-mid Sept season.

Ryanair had 5 based B738s in summer 2010 but also operated 14 out of 21 weekly DUBs with DUB-based machines, 7 of the 14 BHDs with BHD-based machines and (I think) 3 of the FAOs with equipment from elsewhere.

Everything else, both charter and scheduled, is operated by non-based aircraft.
U

Thanks Yokel. Great stuff.
So, max of 25 / 26 based aircraft and the best part of 6 million passengers. All no doubt well understood by the ex-Bristolians at Leeds and explains why no one is rushing around laying new stands left right and centre at LBA at the moment

Any response to this needs to be placed in the Infrastructure thread. 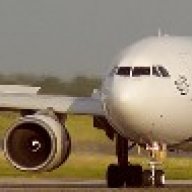 The Easyjet flights to LBA this Winter will opperate on UK registered aircraft and not the Swiss Easyjet aircraft.
M